Here's what's new since my last update in May:
We lived aboard Coddiwomple, based in a marina in Deltaville,VA.  We had a secure and fixed home base to enjoy the work we’d done to our water-home.  We took short local trips and actually sailed places. I did a blue water passage. We did reconnaissance in the Caribbean with three weeks on Terre de Haute, Guadeloupe.  And three more weeks of reconnaissance by car to research sailing to Maine. But along the way we felt pressure, that a tipping point is being reached, and we should sell our labored and beloved Coddiwomple and get serious about our next home.  So in late August we pulled her from the water, made sales videos and trekked back across the US to CA. We were drawn to an area of southern Colorado, northeast of Telluride. Finally back in Laguna, I launched into six years of deferred maintenance on our home and painted inside and out, new carpet, new garage, decks, beds, furniture, etc.  I gave away clothes, surfboards, windsurfing, paragliding, diving, skiing and hiking gear, consolidated old family photos and history and pared, cleaned and reduced everywhere. I feel clean and ready. But for what?
Fun facts:  worldwide debt is ~250 Trillion. That’s ~$115,000 per (developed world) person.  Our children are inheriting our global warming, pollution, corporations, health, diet, contagions, media, guns, etc. legacy.  In short there’s a lot of collective karma to be worked out. Gently or abruptly, things will change. Something new is coming.
Leigh and I very naturally stopped drinking a few years ago.  Eating meat has similarly fallen away. We spend a lot of time meditating.  Leigh is experiencing body sensations, 3-D visions and precursor messengers to very high consciousness.  I feel there is a lot of reorganization, training and preparation going on. For what, or how, dunno. It feels like an apogee to me.
If you’d like to receive my notes in the future, please reply to this email.  Thank you.
As always, I’d love to hear from you,
Brian & Leigh 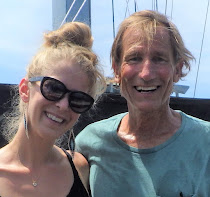